Ode of a  West Texas Mesquite

Upon the sandy soil, blown by a wayward wind,
a mesquite bean fell and began to sink in,
Covered by the sand and nurtured by the rain,
a small tree emerged to beautify the plains.

Immediately, the little sapling could tell,
few of his relatives had chosen this place to dwell,
for the land had become hot and dry after the last rainbow
and made him wonder how nature planned for him to grow.

But the hot sun made him feel strong:
his roots began to spread, his limbs grew long.
The wind shook his leaves, and swayed his branches;
his thorns warned nature 's harmful advances.
One day he sensed he was not alone;
he heard a rumble louder than a cyclone,
coming from the south, men marching in succession,
driving stakes in the ground, with gold their mission.

As they passed by in review, he saw in their eyes,
the frustration and fading hope in Quivira's tantalizing lies,
Onward they rumbled until out of sight,
to leave the plains forever and restore the quiet.

Strange these creatures who have to move;
searching for gold in order to prove
their worth to others with whom they live,
Didn't they know there was much more to give!

Time made his heart beat stronger,
his trunk wider, his limbs longer,
An ole jackrabbit rested in this eastern shade;
An occasional mockingbird would stop and serenade.

Man again this time faster and free,
his braids bounding as he rides to flee,
o​ther men in blue chasing with fire and sound,
Eventually the first man is caught and bound.

Strange, these creatures who have to move,
chasing the other in order to remove,
the defender who lost the race,
never again to show his face.

Time is moving, here comes another man,
so dirty and filthy, what's that in his hand?
Fire and sound! Look at the buffalo fall!
They skin their hides, now the buzzards call.

Strange, these ugly, smelly men
who leave the buffalo herds so thin.
Now others like them have come for the bones,
it seems they won't be satisfied until they're gone!

Suddenly, he sees the old rumble and roar
of thousands of buffalo dancing the plains floor.
Could it be they had come back once more?
No, it's men again, moving cattle by the score. 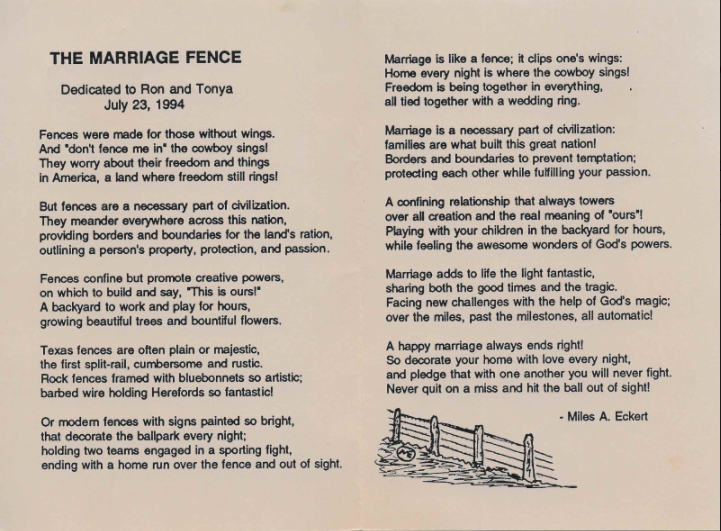